Recently I've been trying to downsize my stash of cabochones, at least a little bit. I solemnly pledged not to buy any new stones, but use what I already have (a TO 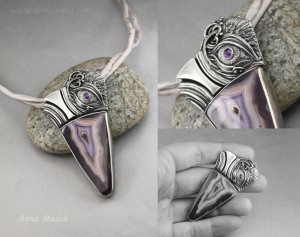 N :-D ). Since then I go over all my stones daily, and each time I find something that is particularly inspiring at the moment.

The thing is, that over the years my work became more sculptural, and usually the focus is on metal, not on the stones. I discovered that it was not so easy for me anymore to design something that features a stone, which is relatively big. I think, automatically, about huge forms, because I feel that there have to be a lot of additional stuff around the stone - I feel that the stone is just not enough.

Yeah. I know - when I said this to myself for the first time I realized right away how stupid this is. So, I decided to push myself a little bit out of my comfort zone, and from time to time focus on the stone and let it lead me wherever it wants. This part is particularly hard for me - I am such a control freak... Anyway - this is one of these projects. 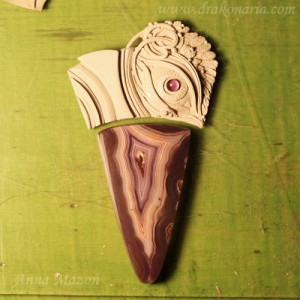 When this cabochon of agate caught my attention I immediately felt very strongly about its pattern and its "energy" (no, I don't mean Capricorn-New Moon-red candle&black cat type of energy ;-) ). I mean that it was timid - those muted hues of purple - so not into your face - but very dynamic at the same time, like something that stares at you from behind the bushes and suddenly realizes that you see it too. Then there is a sudden outburst of movement, UP! UP! To the sky, where you can't reach it.  Ekhm..... :-)

You can see in the picture above, that I sculpted and carved the upper part of the pendant is silver metal clay. The hardest part was leaving this smooth, raised area - I hate 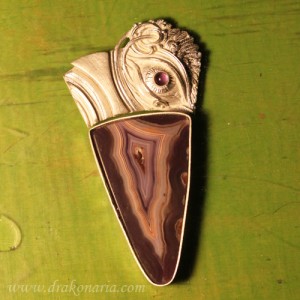 After firing I formed bezels for the stones - big one for the agate and tiny one for a small amethyst. 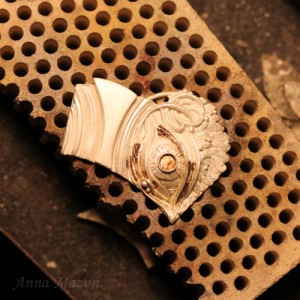 Then I soldered the smaller bezel...

... and cut out of a silver sheet a shape that became a backing plate for the main stone, and the bail at the same time. I soldered the bigger bezel onto this piece of sheet, then formed c-shaped bails and soldered the whole piece onto the back of sculptural part of my pendant.It's so dark, because I took this photo after oxidizing and before finishing. 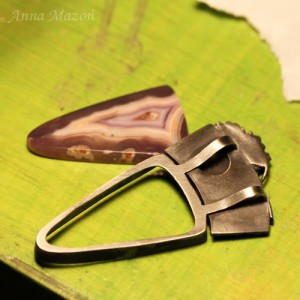 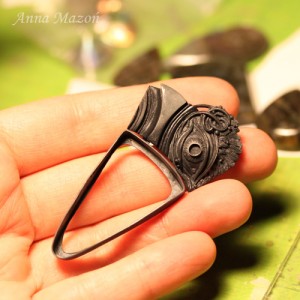 And here is how the front looked like after all the soldering, oxidizing, but before finishing and stone setting.

I called this piece "Spłoszenie" in Polish... I am not sure if this is the best translation possible, but I guess that "Startled" would be the closest thing.

Finished piece looks like this. Of course I am not fully happy with it, I wish some angles (especially the "wing") were a little bit different, but I was really happy with the process itself.  It was different than usually. No sketches, more like "listening" and waiting what comes next. I really enjoyed that. 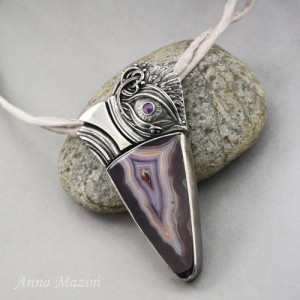 View all posts by: Mark Aida